I was kicked out of a free pro-fluoridation strategy session funded by my taxes and in my neighborhood.

In return for required continuing education credits, pro-fluoridation spokesperson training was offered for free to dental hygienists, at SUNY Farmingdale which is near  my home. I received a free ticket; but upon arrival  was told to leave by a person who didn't think I was moving fast enough.  She said it was because I wasn't a hygienist.   The below  Freedom of Information obtained emails shows the chatter about me.

To summarize, Meg Atwood, a dental hygienist, and Matt Jacob with a University of Arkansas Bachelor's Degree in Journalism, go around the country training "dentists and others with a vested interest in community water fluoridation how to be effective spokespersons for community water fluoridation...[and] how to respond to tough or hostile questions, from media, the general public, legislators, etc."

Apparently, the teachers are ill-equipped to respond to their expected tough questions from me. I'm never hostile, By now, they should know that.  I was a member of the Nassau Suffolk Oral Health Coalition until they created a new requirement to pledge to be pro-fluoridation in order to remain a member and in order to get me to leave which I did quietly.

This fluoridation spokesperson meeting was funded by the NYS Department of Health and held in a tax-payer funded institution. The OK to exclude me came from dentist J.V. Kumar who at the time headed the NYS DofH Dental Bureau (He now works in California)


On March 31, 2015, Mercedes Susi, Grant Project Coordinator for the New York State Dental Foundation informed  Erin Knoerl, MPH, NYS Dept of Health's fluoridation coordinator that "FAN Has been signing up for our fluoride events and children's dental health workshop.  It is their media director Carol Kopf. How is she not smart enough to know to use an alias? Anyhow, I will be removing her from the events (I wasn't representing FAN [Fluoride Action Network] and never said I was. I also wasn't representing the NYS Coalition Opposed to Fluoridation which worked diligently to keep Long Island fluoridation-free nor was I representing the Levittown Safe Water Association which stopped 29 years of fluoridation in 1983)  I use my real name because I have nothing to hide but apparently these fluoridationists have something they don't want the public to know about.)

Erin was glad to be informed and asked Kumar  what to do about me. He said it's OK to exclude me. How is that legal?

On April 22, 2015, Meg Atwood said she knows how to handle me.  Just let her know. Mercedes Susi acknowledged that I may have died out (?)

I think Atwood was the angry lady who wanted me out faster than I was moving. 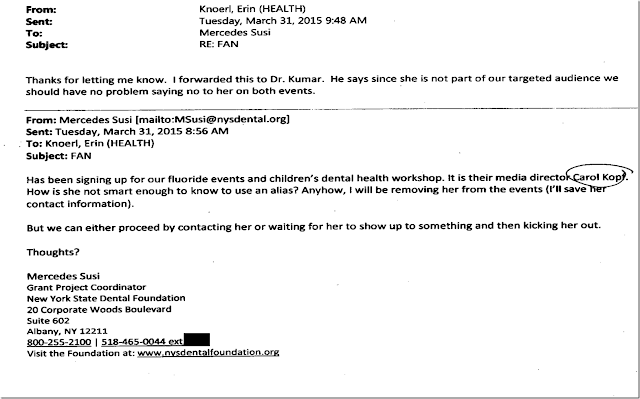 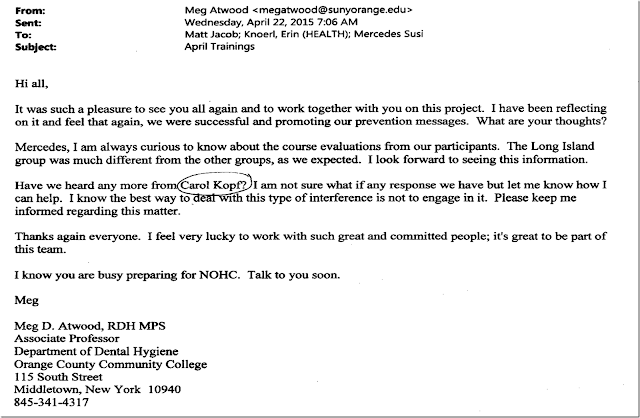 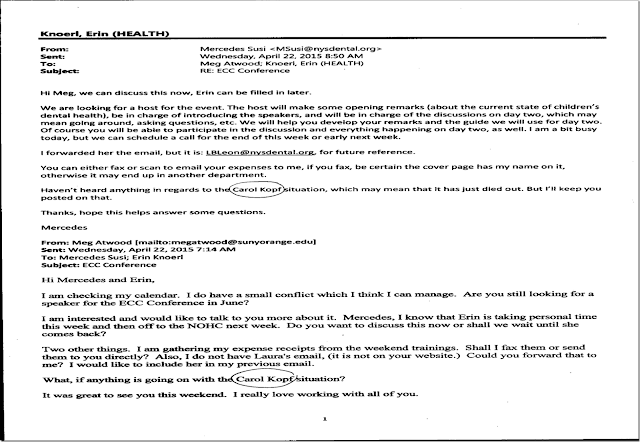