Last year, without public knowledge or input, New York legislators were successfully lobbied by private organizations to use Medicaid money to fund fluoridation schemes and to enact a new law taking power from local legislators and their constituents to stop fluoridation. That power was placed in the hands of pro-fluoridation bureaucrats/activists which is stated to be a blueprint for the nation.

The science upon which that decision was made is fatally flawed as described below.  NYS Department of Health statistics actually prove fluoridation has failed New Yorkers, especially poor NY children.

Also, ignored is a 1990 NYS Department of Health report alerting bureaucrats about fluoride's potential harm to kidney patients, diabetics and the fluoride hypersensitive even at optimal levels.

The companion document and its references to approve Medicaid funds be spent on fluoridation, reveals legislators and pro-fluoridation activists have been mislead

However, this statement is based on one reference - a flawed study (Kumar et al., “Geographic Variation in Medicaid Claims for Dental Procedures in New York State: Role of Fluoridation under Contemporary Conditions,” Public Health Reports Sept-Oct 2010).

Kumar, himself, explains more limitations within his paper  He writes, “This study was subject to several limitations…[and] one should be cautious in attributing this geographic variation solely to water fluoridation.”

Further, DrBicuspid.com reports that "Some 23 New York state general dentists and six orthodontists received $13.2 million in Medicaid payments in 2012 for services that appeared unnecessary or may not have been performed at all, according to a new report by federal health investigators." This type of information is not included in Kumar's calculations.


In another paper published in the Journal of the American Dental Association (Jan 2012) , Kumar et al, reports that [despite NYS’s 72% fluoridation rate] emergency treatment for NYS toddlers' severe tooth decay has grown substantially in numbers and costs; many toddlers required general anesthesia. The reason:  “There is a limited number of dentists willing to treat patients younger than 6 and/or accept Medicaid," admits Kumar, et al.

Another Kumar study published in the Journal of Public Health Dentistry (Winter 2003) reports that severe tooth decay was responsible for two thirds of hospital visits by children under six in New York State. Also, In New York City, 100% fluoridated since 1965, more children required cavity-related hospitalizations, proportionately, than two of New York State's largest non-fluoridated counties, Suffolk and Nassau (Long island) whether payment was made by Medicaid or privately.

In 2009, NY City spent about $24 million on fluoridation annually (Page 2 ). Yet tooth decay is rampant in NYC’s low-income population Further, NYS DoH statistics show that highly-fluoridated NYS counties don’t have less tooth decay and fluoridation has not leveled out tooth decay between
lower and higher income children in 2004  (The following two charts are based on NYS Dep’t of Health statistics) 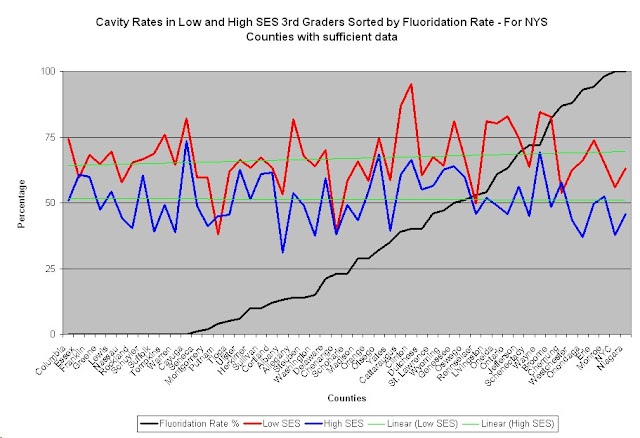 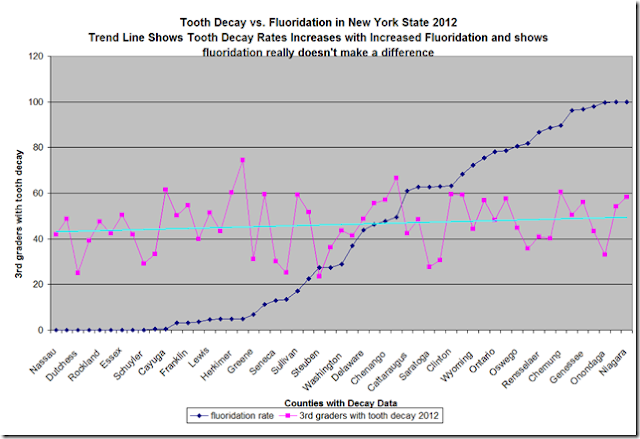 Income breakdown is not available for 2012 data as it was for the 2004 but Dr. Kumar says “disease prevalence among lower-income children remained high”
The above chart shows no relationship between fluoridation and less tooth decay; but NYS 3rd-graders cavities are related to consumption of sugar sweetened beverages (SSB), according to Kumar et al. (“Sugar Sweetened Beverage (SSB) Consumption and Caries Experience.” (page 61 of abstracts presented at the 2014 National Oral Health Conference). They concluded that. Future interventions need to focus on educating parents and children on negative oral health effect of SSB.

The math claiming fluoridation saves money isn’t accurate according to Thiessen and Ko in the International Journal of Occupational and Environmental Health (March 2015) who write: “Recent economic evaluations of CWF [community water fluoridation] contain defective estimations of both costs and benefits.” They concluded “Minimal correction reduced the savings to $3 per person per year for a best-case scenario, but this savings is eliminated by the estimated cost of treating dental fluorosis [white spotted, yellow, brown and/or pitted teeth due to fluoride overdose].”
Many dentists advertise their pricey services to cover up fluorosed teeth such as this NYC dentist: https://www.smilesofnyc.com/gallery/before-and-after-photos/case-37#content
Mild fluorosis is often dismissed as not harmful. But NYS dentist Elivir Dincer, writing in the NYS Dental Journals says, “Such changes in the tooth’s appearance can affect the child’s self-esteem.”

2) The MRT companion document says “Systematic reviews of the scientific evidence have concluded that community water fluoridation is effective in decreasing dental caries prevalence and severity.” Three citations are used to support this claim - (a,b,c below) but they fail to prove fluoridation effectiveness.

a) McDonagh MS, Whiting PF, Wilson PM, et al. Systematic review of water fluoridation. BMJ 2000;321 and dubbed the “York Review.”  But this was the actual conclusion

“Given the level of interest surrounding the issue of public water fluoridation, it is surprising to find that little high quality research has been undertaken. As such, this review should provide both researchers and commissioners of research with an overview of the methodological limitations of previous research.”
Pro-fluoridation activists continue to misrepresent this study so the York researchers were forced to issue this statement in 2003, “What the ‘York Review’ on the fluoridation of drinking water really found.”

Excerpts: “We are concerned about the continuing misinterpretations of the evidence and think it is important that decision makers are aware of what the review really found. As such, we urge interested parties to read the review conclusions in full.We were unable to discover any reliable good-quality evidence in the fluoridation literature world-wide.
What evidence we found suggested that water fluoridation was likely to have a beneficial effect, but that the range could be anywhere from a substantial benefit to a slight disbenefit to children's teeth.This beneficial effect comes at the expense of an increase in the prevalence of fluorosis (mottled teeth). The quality of this evidence
was poor.”
“The evidence about reducing inequalities in dental health was of poor quality, contradictory and unreliable.

The Task Force also admitted it couldn’t evaluate how race, ethnicity and total fluoride intake influenced fluoridation effectiveness because of limited data. “Few studies provided data on socioeconomic status, and most studies had measurement issues; many didn’t blind examiners and there was a lack of consistency among indices used to measure caries."

The Task Force members, themselves, had data quality issues. They write:

“Included studies provided limited data on other sources of fluoride or race or ethnicity. Thus, the extent to which these factors influenced the effectiveness of CWF could not be evaluated…[and] there was not enough evidence to clearly determine the effects of community water fluoridation on health disparities between groups.
“Quality issues across studies included failure to measure or acknowledge relevant factors such as the contribution of fluoride from other sources or access to dental care. Most of the studies also had measurement issues; many did not blind the examiners, and across studies there was a lack of consistency among indices used to measure caries and fluorosis,” they write.
c) Researchers from the University of York criticized the third reference (Griffin et al. “Effectiveness of Fluoride in Preventing Cavities in Adults.” J Dent Research 2007)

“This review concluded that fluoride helps prevent caries in adults of all ages. The authors' conclusions appear to follow from the results presented, although the paucity of more recent studies and poor quality of the included studies limit their reliability and relevance to current populations.”

In fact, when NYS Dept of Health dentist J Kumar published a study to show that fluorosed teeth had less tooth decay, he included national data that shows that, as fluoridation rates increase, fluorosis rates go up but that decay rates stay the same.  Here’s a graph of those findings. 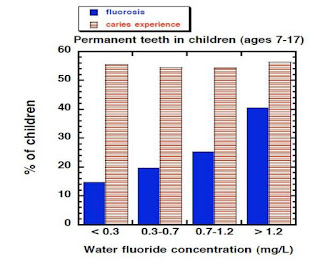 Besides the limitations of the references described above, more evidence points to the lack of valid data showing fluoridation is safe or effective.

--- After reviewing all available fluoridation studies, the independent and trusted UK-based Cochrane group of researchers reported in 2015, that they could not find any quality evidence to prove fluoridation changes the “existing differences in tooth decay across socioeconomic groups.” Neither could they find valid evidence that fluoride reduces adults’ cavity rates nor that fluoridation cessation increases tooth decay.

-- A 1990 NYS Department of Health report alerted bureaucrats that fluoride can potentially harm kidney patients, diabetics and the fluoride hypersensitive even at optimal levels. But it is ignored.

-- A 1988 report "A Study of Fluoride Intake in New York State Residents," by Featherstone reveals that NYC 6-month-olds consume unsafe levels (0.4 milligrams daily from food and beverages). To avoid moderate dental fluorosis (yellow teeth) the Institute of Medicine (1997) recommends 6-month-olds and younger consume only 0.01 milligrams fluoride daily from all sources.
-- All infant formula contains fluoride at levels higher than recommended for 6-month-olds. (Journal of the American Dental Association )

-- Hidden fluoride in baby foods can also mar babies’ teeth, also, according to General Dentistry and Infant juices, too.

The US National Toxicology Program (NTP) is reviewing hundreds of studies linking fluoride to adverse brain effects. The report won't be finalized until 2018 and may signal an end to the fluoridation program nation-wide. At least 314 studies investigated fluoride’s effects on the brain and nervous system. This includes 181 animal studies, 112 human studies, and 21 cell studies. Fifty studies link fluoride to children’s lower IQ.
The majority of these studies were published after the 2006 National Research Council’s fluoride toxicology report concluded, "It is apparent that fluorides have the ability to interfere with the functions of the brain."

But it’s just not the brain. Science, shows fluoride can do a lot of damage and has some nasty side effects which you can see here: http://www.FluorideAction.Net/issues/health

While you may have heard the oft-repeated CDC slogan that fluoridation is one of the Ten Great Public Health Achievements in the 20th Century, The CDC also reports the following:

“In the earliest days of fluoride research, investigators hypothesized that fluoride affects enamel and inhibits dental caries (cavities) only when incorporated into developing dental enamel...” but now CDC admits that: “Fluoride works primarily after teeth have erupted…”

"Saliva is a major carrier of topical fluoride. The concentration of fluoride in ductal saliva, as it is secreted from salivary glands, is low --- approximately 0.016 parts per million (ppm) in areas where drinking water is fluoridated and 0.006 ppm in nonfluoridated areas. This concentration of fluoride is not likely to affect cariogenic activity."

Fluoride is not a nutrient or essential for healthy teeth – meaning consuming a fluoride-free diet does not cause cavities. Fluoride is a drug with side effects which shouldn’t be funded by Medicaid, prescribed by a legislator, delivered by water engineer, and dosed based on thirst and not age, weight, health without monitoring for side effects and overdose symptoms.

**Dental Therapists need just two years training to do simple dentistry.  Other developed countries have successfully employed DTs for decades. Rural Alaska and Minnesota legalized DTs, other states are trying.  No New Yorker is, or ever was, fluoride-deficient.  Many are “dentist-deficient” for many reasons which floods our Emergency rooms with dental patients in severe pain costing  taxpayers often ten times the amount of a simple filling – wiping out any projected “cost savings” of fluoridation.
DTs will go into mouths and areas where Dentists refuse to go and can charge less, having less student debt and will accept Medicaid, unlike most New York dentists. Promoting fluoridation wastes money and endangers workers and water-drinkers health.  Legalizing Dental Therapists costs nothing but will lower dental costs to individuals and Medicaid. Articles supporting Dental Therapists: 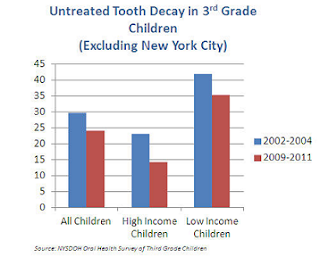